Good evening. It sure is hot here in the south! It was in the mid 90's today. I enjoy fall and winter so much more. I am not made for the heat. Yuck!

This may be a long post, but I wanted to fill you in on what has been going on in our world for quite some time.

When Darbee was born, she had reflux issues in the hospital. We switched formulas twice before we brought her home. She has had stomach problems most of her life. It has always been treated for reflux. She has taken her fair share of Zantac. Nothing seemed to really help. She always just tolerated it and we learned what bothered her most and avoided those foods.

The last year and a half or so we have seen things get worse. She was having more stomach pain and some pain led to vomiting.Her stomach pain never went away. You could ask her any time during the day or night if she was hurting and she would say yes. It was worse at night, but always there. One day, she said to me, "Mommy, I think Jesus just made me to hurt. It's ok and doesn't hurt that bad. That is just how I am made." How heartbroken I felt as her Mommy not to be able to do something that would make it go away. I resolved that day and made a promise to myself to find out what the cause was. I would not stop until we found a cause other than "it's just reflux."  Why keep treating her for reflux if it wasn't helping?

Another trip to the doctor and her pediatrician said maybe it was from all of the infection from her tonsils. She assured us the pain would go away when her tonsils were taken out and the infection was cleared. I was so excited and hopeful. So was Darbee. Honestly, it has gotten worse since her surgery. We were all so disappointed and discouraged. After abdominal x-rays and an abdominal ultrasound, her pediatrician said she couldn't do anything else and was going to refer her to a GI doctor for them to scope her.  We were left with no answers. This has been going on for most of her life and we just want her to not hurt and feel normal all the time.

I have talked to so many moms and read so many internet articles searching for an answer. A friend of mine mentioned us seeing her daughter's doctor who had helped her with some stomach troubles. I was ready to try anything so we switched pediatricians.  I was so impressed with this new doctor. He seemed so very thorough and very attentive. He didn't want to just prescribe her a medicine for something, he too seemed to want to find the root of the problem. He did another ultrasound and many many blood tests. The only thing he found was some food sensitivities. Maybe this was the answer.

Darbee started a new diet in March. She was to eat nothing that contained gluten, dairy or eggs. Basically nothing. She has been the best sport about it all. Me....not so much. It is hard! We have found lots that she can have but not much when you really think about it. I have found vegan sour cream and onion chips, vegan chocolate chip cookies, and even tried to make homemade biscuits without grease, milk, or eggs. Yuck! Can she really do this the rest of her life?

Two weeks ago, we went for a follow up on the diet. It has helped a lot, but the pain is still there. The vomiting is still randomly happening. We are still having to get up at night with a tummy ache. At this visit, we just happened to see the nurse practitioner. Honestly, it was God that did it. He knew who we needed to see. She was amazing! She asked if she could draw blood just one more time and check for a bacterial infection. She said it was not likely she had it but she just wanted to rule out one more thing. She also ordered an upper GI. Darbee has had so much blood work done in the last year, she cringes when they mention a needle, but she made it. 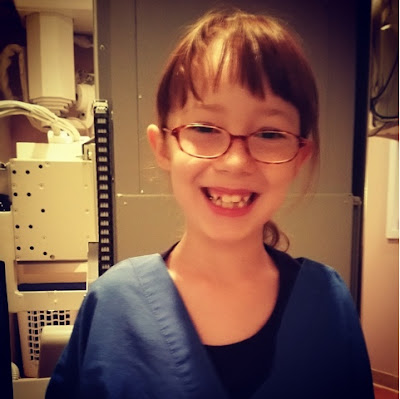 The upper GI went well. She was so brave and swallowed all of that yucky stuff like a champ. I was so proud of her. I don't think I could have got it all down.

Last week, the nurse called and asked us to make an appointment to come in and discuss the blood work. There was some issues. My heart raced a bit but I was just hopefull for an answer.

Yesterday was that appointment. I didn't want or really expect anything bad but I was hoping for an answer. Her upper GI test was perfect. No problems there, thank the Lord.  Guess what? She tested positive for the bacterial infection H. Pylori. This could be our answer we have been waiting years for! This is a bacteria that burrows in your stomach and attacks the lining of it.   It also lives in the small intestines and can cause terrible problems. It can even live in your mouth and cause tooth problems! It can live in your body for years. I am so hopeful now that maybe we FINALLY may have an answer. 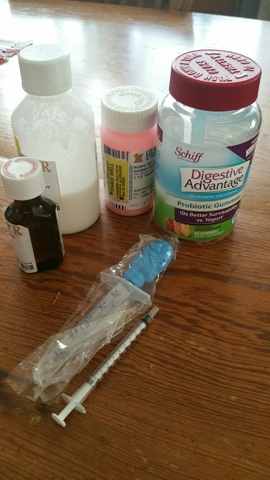 H. Pylori is treated with a triple therapy approach. She has been prescribed two super super strong antibiotcs that she takes together two times a day along with a stomach medicine and a probiotic. Whew! It may be a rough 10 days but they are confident this will destroy the bacteria and she will feel a difference.

Will you help me pray this is the answer? That this will be the end of a super long journey. That she will not have a nagging stomach pain all the time anymore. That she will not have to have a scope done. That we will be able to go to bed each night without having to get up and sit for several hours until the hurt goes away.
I am praying so hard this is it.

Stacy and I will also be tested. It is not sure how this bacteria is transmitted but likely that since she has it, one or both of us do as well so we will both be tested. This way we will ensure she will not be reinfected from one of us.

We are hopeful and so thankful for these new doctors who have come into our lives. And you wanna know the best part? Once the next two weeks of medicine taking is all over, she is allowed to slowly start reintroducing normal foods again!!! She cannot wait! We did sneak in a treat last night to celebrate. 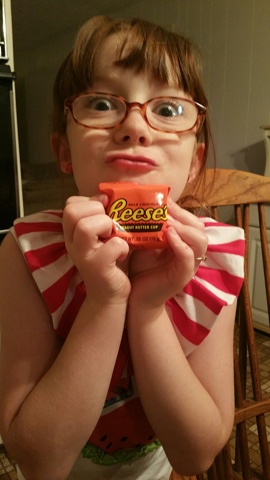 She savored every bite.
And she did enjoy some cupcake icing today. (Smile) 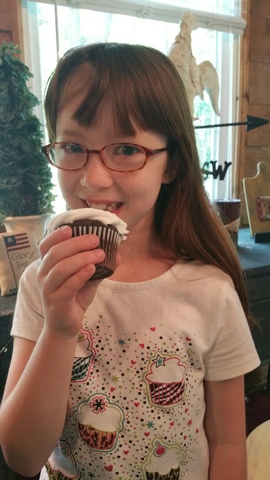 She has a list of places she wants to go eat when she can...we are waiting to celebrate...

Holly
We are a Christian homeschooling family who enjoys spending time learning together.